2016 Pantomime Review of SHADES
Beauty and the Beast 2016


The SHADES 2016 pantomime “Beauty and the Beast written by Donna Jones was a confection of delights!  All the ingredients of a successful pantomime were in the mix.  The script was funny and well crafted with lots of action to please all ages.

Bad fairy Tyra Whifflenut played with plenty of evil cackles by Lynne Bramble battled against good fairy Penelope Jollybottom played by Fiona Gallacher, who radiated sparkle and charm.
The strong chorus of singers and dancers played by Henrietta Griffiths, Ffion Harris, Imogen Mundy, Clare Stevens, Rowena and Samantha Tyler sang and danced their numbers with great energy and animation.
Action aplenty was provided in the pantomime. The "If I was not in pantomime" routine was well done and very funny, the scary wolf dance provided drama and a great fight scene, the Batman fight between Gaston and the Beast was well timed and funny and the transformation scene at the end of the pantomime was a layer cake of emotion with Katie Haycraft's sad and beautiful rendition of "Make you feel my love" and James Reed's dramatic transformation from Beast to Prince with just the right mix of drama and humour.
There were plenty of great characters too.  Gaston Gates was the dastardly, moustached and vain villain of the pantomime.  Donna Jones played him with great gusto.
JP Judson played the Beast's servant Lumiere with Gallic suaveness and was a great foil for the Dame, Mrs Potts played by Carl Harmer. Carl and JP really engaged the audience with their scenes and Carl managed to get laughs by just appearing on the stage!
Mrs Pott's sons, Chip and Dale, Erin Harris and Sonia Chapman made a great duo, doing a good job with their quick fire jokes and Candy Crush sweet making scene.
Maurice Ringer, Belle's father played by Peter Palmer had the audience's sympathy as the unfortunate inventor and was suitably terrified by the Beast.
The last (but by no means the least) character was the one and only Ron Bailey who played the camp servant Oddbod gaining cheers from his usual fan club.
Main characters Belle and the Beast, Katie Haycraft and James Reed, inhabited their roles with conviction.  Katie made a lovely Belle who entranced us with her singing.  She has such vulnerability on stage which endears her to the audience.  You could hear a pin drop in her two main songs and she bought a tear to the eye with "Make you feel my love".
James as the Beast managed to convincingly transform from the scary Beast of his early scenes to action hero and to the Beast falling for Belle, with just the right humorous touches.
The cast was well supported with fantastic costumes from Marion Cozens, lighting by Alexander Lyon, by all of the backstage crew and choreography by Linda Williams and Clare Stevens.
Musical Director Chris Snelling and drummer Mark Stammers did their usual superb job with the musical numbers, inter-scene music and signature drum and cymbal crashes.
Well done to Clare Stevens who made her directing debut and produced this fast flowing and very enjoyable production all in just 3 and a half weeks, ably assisted by Donna Jones and Janet Cornwell.
SHADES have donated all proceeds from their Raffles and collections to Cancer Research which came to a grand total of £541, this charity was chosen by Peter Payne, in memory of his late wife and our good friend Anne, who had been involved with SHADES, performing and directing for many years, and more recently taking on the role of Box office and Chairman, a huge thank you to all who came to support us.
Well done everyone!! 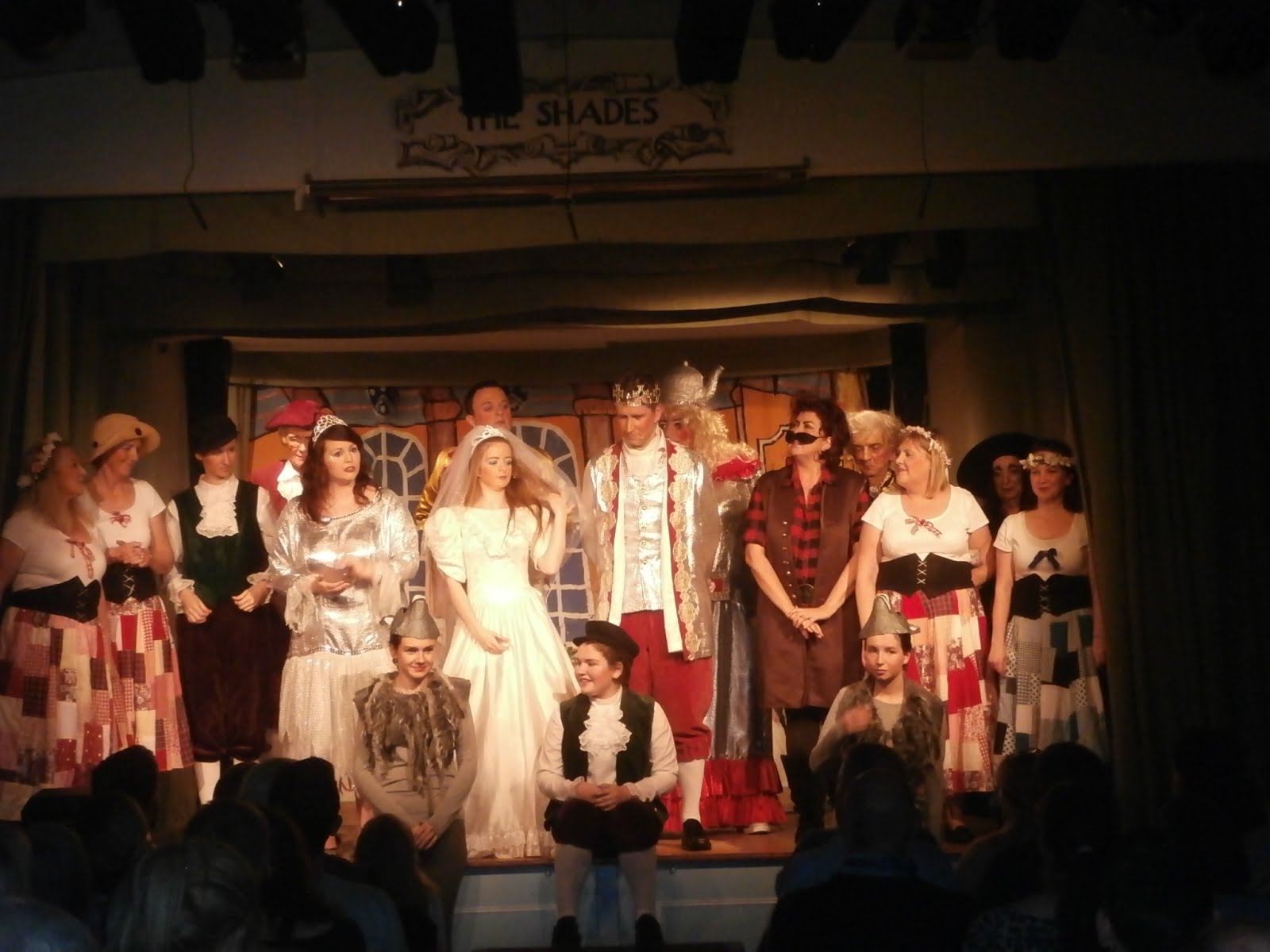